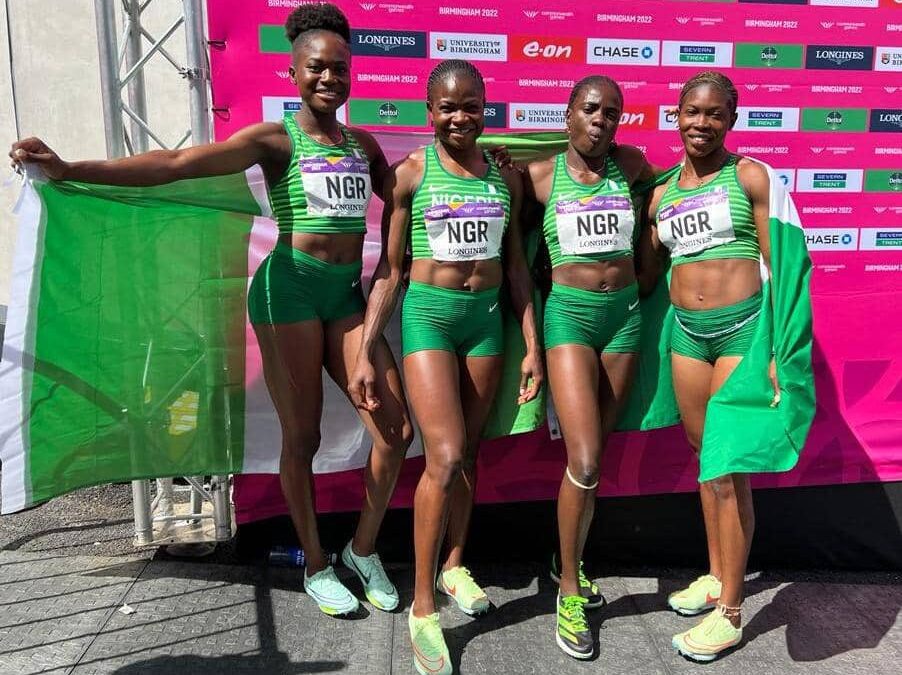 Following her world-record leap of 7.00m at the ongoing Commonwealth Games in Birmingham on Sunday, long jumper Ese Brume helped sixth-place Team Nigeria record their best performance at the Games in 72 years.

The women’s long jump record at the Commonwealth Games was broken twice by Brume as she advanced to the gold medal, which would have been the nation’s 12th gold medal overall.

Her work ensured that Team Nigeria won 12 gold, nine silver, and 14 bronze medals, surpassing their 1994 performance in Victoria, Canada, when they won 11 gold, 13 silver, and 13 bronze.

After setting a new Games record of 6.99m on her fourth attempt, Brume gave herself a strong chance to win the gold medal.

Following a leap of 7.00m to put herself far ahead of the crowd in front of her, the 26-year-old then broke the Games record with her final attempt, winning Nigeria’s final gold medal of Day 10.

Deborah Acquah of Ghana and Brooke Buschkuehl of Australia, who placed second and third, respectively, with leaps of 6.95 meters and 6.94 meters, were unable to catch the Nigerian.

The athletes stepped up their performance for the historic outing at the Games after earning an impressive 14 medals on Saturday, bringing their total to nine gold, eight silver, and 13 bronze medals for a total of 30 medals on Day 9.

Prior to Sunday’s competitions, the team’s medal total put them in third place alongside the group that won the same number of medals (11 gold, 8 silver, and 14 bronze) at the Delhi edition in 2010 of the competition.

Amusan finished the final in 12.30 seconds to win Nigeria’s 10th gold medal in Birmingham, successfully defending the 100-meter hurdles title she won in 2018 in Gold Coast, Australia. She is the first Nigerian athlete in history to do so.

Amusan, Favour Ofili, Rosemary Chukwuma, and Grace Nwokocha of Nigeria competed at the packed Alexander Stadium in Birmingham, breaking the previous African record they had set in Oregon, USA at the World Athletics Championships, with a time of 42.10 seconds.

The legendary run was launched by Amusan, who ran a stellar first leg. Ofili then took over and made sure Nigeria kept its lead before passing the baton to Chukwuma.

Chukwuma completed the curve with ease and handed the lead to Nwokocha, the current 100-meter champion of Nigeria.

In her eleventh attempt at the Commonwealth Games, the 21-year-old held onto the lead despite the threat posed by Great Britain’s anchor leg runner, Darly Neita, to win Team Nigeria’s first women’s 4x100m relay gold medal.

However, all eyes were on Brume to deliver the nation’s record-breaking medal in the long jump in Birmingham, and she delivered, sending stadium fans into hysterics Sunday night.

The men dominated the competition, winning nine of the 11 gold medals at the international competition and 31 of the total 37 medals, in contrast to the women, who took home just six medals, in 1994.

But in this year’s edition, women have made all the headlines and changed the course of history. Adijat Olarinoye won the gold medal in weightlifting, setting a new Commonwealth Games record in the process, and what better way to accomplish that than to win the first gold medal of the competition.

Since then, the female athletes have taken home 22 medals, including all nine of Nigeria’s gold medals from the Birmingham Games, while the male athletes have only collected eight medals, bringing the total to 30.

Just like in 1994, when the men won all of the six gold medals in the weightlifting category, the event has proven to be a “goldmine” for Nigeria.