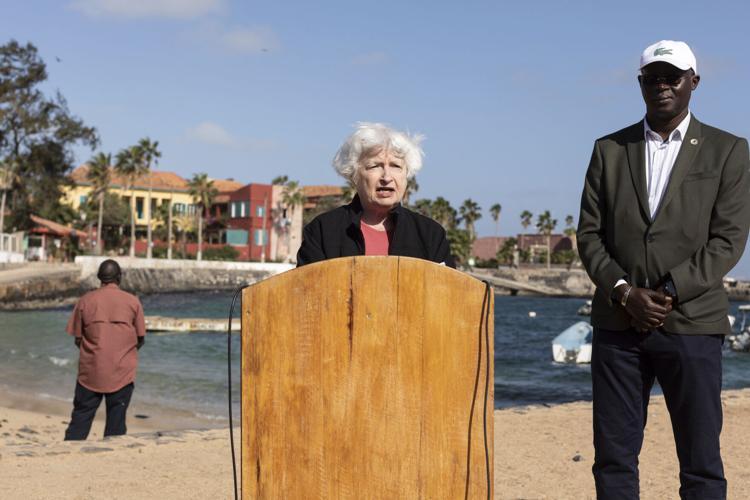 On Saturday, US Treasury Secretary Janet Yellen visited a salmon-colored house on an island off Senegal, one of the most well-known representations of the atrocities of the transatlantic slave trade.

It is a part of a 10-day journey intended to restore economic ties between the US and Africa.

Tens of millions of Africans were transported across the Atlantic from the structure, known as the House of Slaves, never to return.

Gorée and the transatlantic slave trade are not just a part of African history, according to Yellen. They also contributed to American history.

We are aware that the tragedy did not just affect this generation of victims. Black Americans were not given the freedoms and rights guaranteed to them by our Constitution even after slavery was abolished, despite the fact that many of them can trace their ancestry through ports like this one across Africa.

According to the White House Historical Association, the construction of some of the most illustrious institutions in the US, such as the White House and Capitol, involved African slaves and their offspring.

Yellen acknowledged the consequences of that violent past’s persistence as well as the survival of many of its victims.

The remarkable thing about the United States, she said, “is how many African-American men and women overcame the odds, created better lives for themselves and their descendants, and became central to our economy and democracy, building our cities, powering our industries, and bending the conscience of the United States and the world toward justice, all of which were accomplished in the face of systemic social and economic injustice.”

Many dignitaries, including former US presidents Barack Obama and Bill Clinton as well as Nelson Mandela of South Africa, have visited the island before Yellen did.

The military chief of Burkina Faso demands that France leave