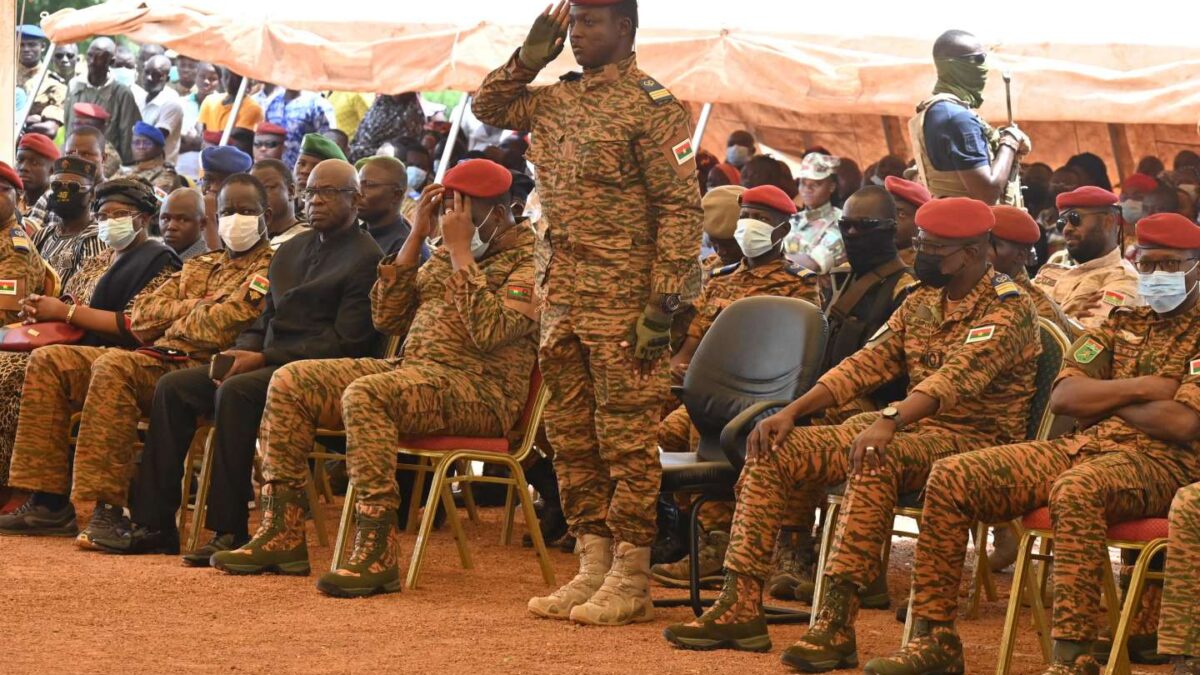 Burkina Faso's new junta leader Capitain Ibrahim Traore (C) attends the funerals of 27 soldiers killed as they escorted 207-vehicles in a convoy, during a ceremony at the General Sangoule Lamizana military camp in Ouagadougou on October 8, 2022. The ambush of the convoy, claimed by Al-Qaeda, officially killed 37 people, including 27 soldiers. Seventy truck drivers remain missing, according to their union. The disaster has become a symbol of the state's inability to secure remote countryside areas and protect local people, 10 years into a bloody jihadist insurgency in the Sahel region. Five days later, Burkina was rocked its second coup in less than nine months -- the fifth in two years in the landlocked West African region. (Photo by Issouf SANOGO / AFP)
Africa

Volunteers from all walks of life are flocking to Burkina Faso’s new volunteer program in Ouagadougou.

In October, the country, which is dealing with a jihadist insurgency that has steadily expanded its lethal grip, requested civilian assistance.

“Given what is happening to my nation, we have lost our land; as a butcher, I have made many trips, but I am no longer able to travel,” Ablassé Kaboré explains.

“And I’ve lost a lot of friends… I had friends who used to pan for gold in the bush to the east; all of them have returned to Ouagadougou, and some are no longer alive… when I speak, I feel like crying… I’m willing to die for my country.”

Burkina Faso has launched a recruitment drive to find 50,000 civilian defense volunteers. Volunteers for homeland defense are among them. Along with the defense and security forces, these men and women are on a mission to protect the people and property of their home communities.

“We women have strategies, it’s like a family, the nation is your home, it’s your house,” says Edwige Nikiéma.

Since 2015, jihadi violence has killed thousands of people. The last elected president was deposed as a result of public outrage over the insurgency. According to professor Zakaria Soré, the army is changing tactics in order to increase its ranks.

Recruiting 50,000 volunteers entails hoping to have a few fighting forces spread out across the country, according to the socio-anthropologist and research professor at Joseph Ki-Zerbo University. “The reality of the country is that the army and other security and defense forces are not able to cover the entire territory, so when we look at it, there is a networking problem that means that there is a lot of territory that is not covered by the defense and security forces,” he explains.

According to government data, enlistment officially ended on November 18, with over 30,000 people aged 18 to 77 registering.

Before being armed and given communication devices, the volunteers go through 14 days of civic and military training.